What happens when a VERY special VIP visits the district?

You try very hard to show him the best of your District, that’s what.

On Tuesday, April 25, Toastmasters International President-Elect began a multi-day visit in District 10. District Director Dave Wiley and I met Balraj in Dublin, Ohio, where he had been visiting District 40, and then immediately set off on the first of many corporate visits I’d arranged for him over the next four days.

The President-Elect was kind enough to allow us and all those he met to call him “Balraj.” Imagine: some people find his last name a tongue-twister!

The purpose of his visit was to help the Trio (and primarily me, the Club Growth Director) build our district. I confess I didn’t really know how to plan out Balraj’s day, so I based my planning on what I’d done when our region advisor, Carol Prahinski, visited last September. Except I put Balraj’s schedule on steroids. I made sure our schedule was jam-packed. I wanted him to leave Ohio knowing that we have a LOT going on in District 10!

I focused on introducing him to decision-makers in organizations that were considering establishing a Toastmasters club, as well as to decision-makers who could help support an already-established club. We also sprinkled in some media opportunities and a visit with a local mayor. Balraj recorded a podcast with Toastmaster Kim Krajci. District Director Dave Wiley arranged for Balraj to present two corporate recognition awards. One was given to Timken Corporation, and the other to Ariel, for their generous support of Toastmasters.

I think we wore our president-elect out. I caught him napping on our way to Mansfield after a busy morning of meetings in downtown Cleveland. I didn’t blame him – the schedule was extensive. And exhausting.

Here’s where we went: Upper Sandusky, Richfield, Mentor, Independence, Mayfield Village, Canton, North Canton, Mt. Vernon, Cleveland (multiple stops, including an hour on Toastmaster Gwen Jarvis’ AM 1490 drive-time radio show to talk up Toastmasters with Balraj, Dave and me), Fairlawn, Medina, and Mansfield. He spent only a few minutes visiting a club (where we’d hoped to meet a new club prospect). Club visits are frowned on, because they take away from time he could be spending promoting Toastmasters to those who aren’t members, but oh, I could tell those club members were thrilled to have this VIP in their midst! 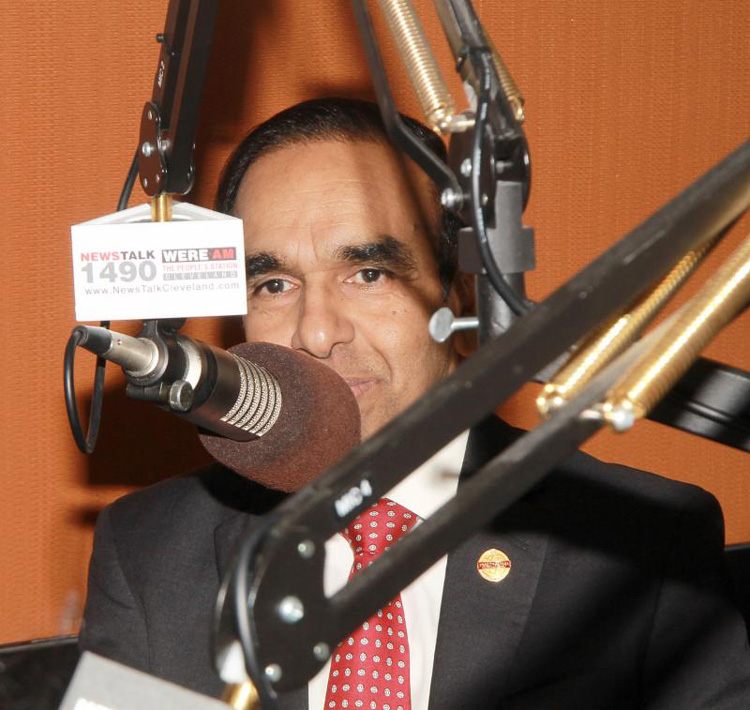 Listen to the Gwen Jarvis’ radio interview with Balraj

Balraj joined us for the District Executive Committee dinner, and came to my house one evening where I learned

(a) I talk too fast (hah – you should have heard me before Toastmasters) and
(b) I don’t breathe right.

Balraj is a big believer in yoga and deep breathing, and that surely contributes to his placid nature.

Saturday was the District conference, an exciting all-day event featuring a keynote and education session by Balraj. The day wrapped up with a debriefing with the current Trio and our 2017-2018 Club Growth Director Mark Timm.

The very next morning, Tonya Thompson, a member of Marion Toastmasters and an employee of AM 1490 in Marion (broadcast internationally on iHeartRadio, as is Toastmaster Jarvis’ radio show) recorded an interview with our president-elect.

And then Balraj bade farewell and flew off to visit five countries in West Africa, which will wrap up his 28-day tour.

Balraj knows more about Toastmasters than anyone I’ve ever met. He’s been a Toastmaster for 28 years. He advanced along the leadership path step by step. He will be our organization’s top leader when he is installed in August. Yes, our #1 guy – not just in his home country of Sri Lanka, or of the US organization, but of Toastmasters International, with over 350,000 members in 145 countries around the world.

And this VIP spent nearly six days with us in District 10.

Balraj cares deeply about Toastmasters, and about every person he meets. He enthusiastically shares his ideas and knows exactly how to address objections. I suspect he imagines a world in which everyone benefits from the effective programs that Toastmasters provides. And no, Toastmasters isn’t his life. He is an engineer by training, and runs a manufacturing company that his father started. He boasts that the principles he’s learned in Toastmasters have resulted in 100% retention of his employees for over seven years. Goodness knows his home club can retain members: 106 people belong to his home club!

His time with us was intense, but it was a valuable learning opportunity. I probably should have built more time into the schedule to reflect on and process all that he shared with us, but at least while Dave was driving I took notes! (Dave put a LOT of miles on his car during Balraj’s visit.)

I hope that Balraj left us knowing that we’re striving to help all of our members make the most of their Toastmasters experience, and to introduce the benefits of Toastmasters to as many people as possible. I hope that he saw the best of our district, and, while we certainly have room to improve (which district doesn’t?), we are proud of our district and club leaders, and of all our members who use this proven program to reach their communication and leadership goals.

The entries in this blog are the opinions of their respective authors. These opinions are not authorized by, endorsed by, sponsored by, or otherwise affiliated with Toastmasters International.
This entry was posted in Conferences, District News, Leadership, Member Spotlight, Newsletter, Public Relations, Special Events, Uncategorized and tagged Balraj visit